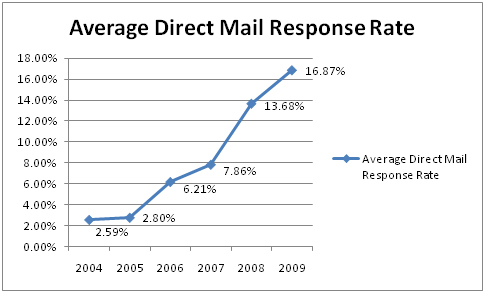 Take a look at our average direct mail response rates over the past few years. I'm pretty proud of them. I can tell you what we did to get each of those sharp upturns. First we built out a new customer relationship management (CRM) database to roll up transactions under individual customers. The subsequent upturns resulted from better and better segmentation made possible by our new CRM app. We started with the basics. We mailed only to people near our locations and made sure to include previous redeemers and loyalty program members and we got a spike. Then we assigned weighted values to various transaction types based on their relative values and we got another big redemption spike. Next we scored customers with a recency-frequency-monitary (RFM) model, and again got a big spike in redemption rates.

Then it got challenging. RFM scoring is great for making sure you send to recently active customers. And our best customers, the ones who come most often and spend the most per visit, tend to be the ones who redeem direct mail. So recent direct mail redemption is heavily weighted in our model. But three factors conspired against the success of our segmentation model.
First, we mail only three times a year, so the weighted redemption transactions that float a customer to the top of our mail file are four months old at best.
Second, we add hundreds of thousands of customers to the CRM database every quarter, and these customers have no significant redemption history.

Third, we have 3.5 million customers in our database. But we only have budget to mail to just under a million of them.
This forced us to choose between potentially valuable new customers and older direct mail redeemers. We wanted to mail to the newest customers, but many of them came into the CRM system with a sweepstakes entry or a more-info signup or another transaction type that's worth much less than a direct mail redemption.  We couldn't mail to everyone, so we mailed to the previous redeemers instead of the newer customers. But we knew some of the new customers would become valuable redeemers given a chance.
Our challenge became finding a way to pick out the would-be redeemers from the new customer population. Our solution was a data mining algorithm called a naive Bayesian classifier. By combining previous years' transaction data with geographically derived psychographic profiles and freely available census demographic data, we can predict who among our newest customers has the most in common with our best direct-mail redeemers from years past. This allowed us to weigh a good classifier score in the new customer population as equal to a previous redemption in the relatively dated customer population. The result of all this was the next spike on the graph.
Where will our next big spike come from? Good question. Right now I'm thinking that looking at the three yearly mailings separately might be fruitful. I'll post a graph of that next time.
Posted by Paul at 11:21 AM